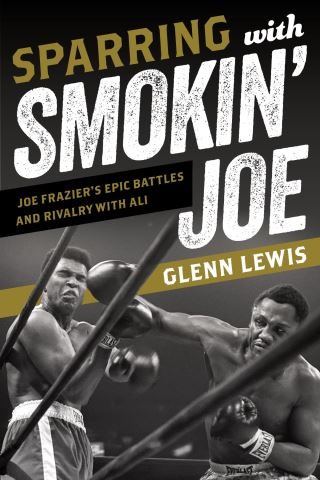 An intimate portrait of Joe Frazier, whose ferocious rivalry with Muhammad Ali made them both boxing legends and cultural touchstones for an era.

Just in time for the fiftieth anniversary of the Fight of the Century (Ali–Frazier I), Sparring with Smokin’ Joe provides a penetrating, at times brutally candid, look at legendary champion Joe Frazier. Glenn Lewis spent several months in the gym, on the road, and in verbal tussles with Frazier in 1980, when Frazier was at a crossroads in his life and career. Lewis recounts Frazier’s candid takes on his still-recent Hall-of-Fame career, wars with Ali, and hard-scrabble roots. Frazier also reflects on Ali’s upcoming comeback fight against Larry Holmes, his own possible return to the ring, preparing his son Marvis for a pro boxing debut, and the impact of racial tensions and cultural upheaval on his fighting legacy.

Sparring with Smokin’ Joe reveals compelling, never-before-heard anecdotes that give new insight into the usually private Frazier, including how Ali’s verbal attacks on Frazier alienated him from his own people and continued to trouble him long after retiring from the ring. An intimate portrait of a legendary fighter, Sparring with Smokin’ Joe finally shares Frazier’s side of an unforgettable rivalry.

Glenn Lewis is director of journalism at York College, CUNY, and professor of print journalism at the Craig Newmark Graduate School of Journalism at CUNY. The veteran journalist and author has written about sports, health, media, and societal trends. He has waited four decades to write Sparring with Smokin’ Joe about his time with the iconic heavyweight champion Joe Frazier. Lewis has also been an on-air media and journalism expert for Fox 5 TV-News. He lives in New York City with his wife and has two grown daughters.